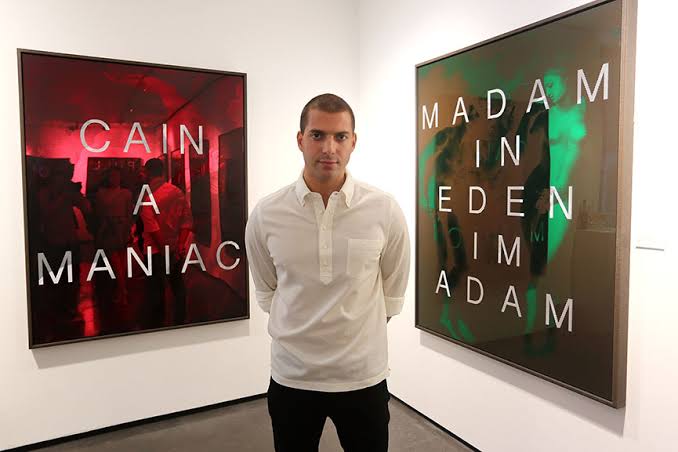 Massimo Agostinelli was born in 1987; an Italian-American, London-born artist from Manhattan, New York, living and working in Switzerland. He graduated from Webster University whilst pursuing apprenticeships in typesetting and typography as well as other forms of printmaking processes.

His first original artworks were exhibited at a London art gallery in 2014, combining iconic art and pop culture images with palindromes in bold typesetting over the image. The fascination with words continued into pieces featuring pop cultural icons, with their bold typeset names morphing into anagrams commenting on them through lenticular art print animation.

The interventions expanded to London and the 2019 Frieze Art Fair, a year which also saw the creation of a palindrome diptych for the Michelin starred Marea restaurants in New York and Dubai, and an expanding range of work with philanthropic organisations including UNICEF, AmfAR, and the Laureus Foundation, as well as being a founding patron of the Zeitz Museum of Contemporary Art Africa.

Focusing on traditional and innovative cutting edge technologies using a wide variety of mediums and techniques within a diverse spectrum of crafts, Massimo is an artist embracing lenticular art prints as an intrinsic feature of the original artwork and its meaning, and we're excited to feature his original work here in the Lenticular Gallery, just outside London in Kent.

You can learn more about Massimo and his work on his website at massimoagostinelli.com

The Mona Lisa / Ah Not a Smile