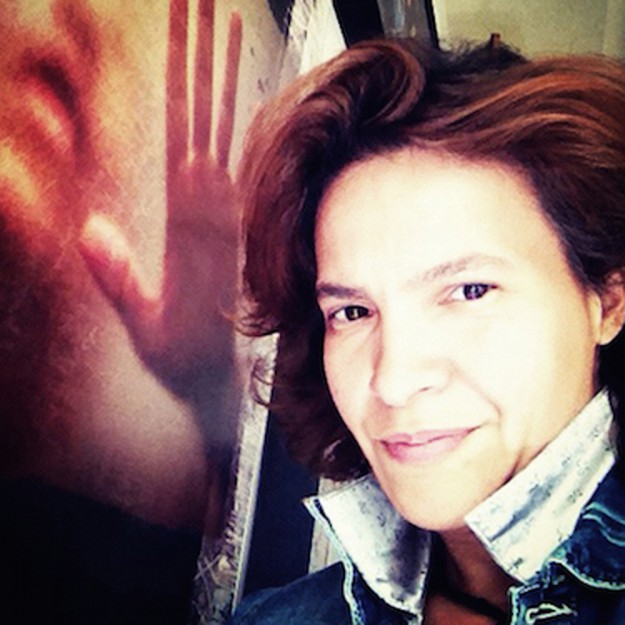 Luz Perez-Ojeda grew up with artist parents, learning from them and others as she grew up and began working as an artist, painter, and photographer. She was also drawn to the art of silk screen printing, working at Atelier Del Arco in Paris and spending a decade photographing and serigraphy printing for the optical and kinetic art master Carlos Cruz-Diez (who has also produced several original lenticular artworks).

“When I start working, I have a general idea of what I want to create, but my way of working is very spontaneous and intuitive, it is like an automatic drawing, produced from a subconscious, external and/or spiritual source, without conscious awareness of the content. After finishing I start analysing the symbols and content of my artwork.

“Symbols allow people to go beyond what is known or seen by creating links between otherwise very different concepts and experiences, they carry ideas or visual images and are used to convey other ideas and beliefs.

“My favourite artistic subject is often the female character who embodies my creative ideas in an allegorical form. Most of the portraits that I create are a mix of several photos on my computer; I create a new, non existing person and construct a narrative out of it.”

Influenced by pop artists like Andy Warhol and the kinetic street photography of William Klein, and seeking the energy of both throughout her own original digital artwork, the discovery of lenticular art prints offered a range of opportunities for dynamic effects, conceptual themes, and a physical interaction with each individual viewer.

“The lenticular printing technique is a time-space and movement vector. It allows visually developing space through depth and image volume, it offers the possibility to represent the movement of time with animation like cinema or .gifs, it amplifies the possibility of the image narrative; before and after, a mini story, and it invites the participation of the observer moving from side to side to observe it.”

Perez-Ojeda describes her art as her language; these images are the words which express her feelings, visions and moods and she constantly seeks to experiment and expand on her vocabulary, already incorporating lenticular print as another collage material, and exploring the potential for lenticular artwork to integrate developing fields of imagery such as 360 degree photography, virtual and extended reality.

We're excited to welcome such exciting perspectives, creativity, and modern art print expertise to The Lenticular Online Art Gallery collection, and you can discover more about Luz Perez-Ojeda's work at her personal website luzperezojeda.net

Eve and the Forbidden Fruit

The Amazon is Burning